On March, 12, 2020 was signed a Contract Agreement to carry out development, supply, implementation and maintenance works of automated fare system in Lviv city with the winner of the tender – Czech-Ukrainian Consortium of companies Mikroelektronika spol s r.o. та SoftServe — Municipal Technologies LLC with municipal enterprise «Lvivavtodor».

«On December, 11, 2019 the tender committee has already completed reviewing the offers from the bidders for the electronic ticket and decided with winner. This is a consortium of Mikroelektronika and SoftServe. Unfortunately, the bidder who submitted a 2M more expensive bid, concluded that the tender committee is not objective and complained to the EBRD on the customer municipal enterprise «Lvivavtodor» claiming that the procedure was incorrect. The Bank has considered the complaint more than three months and in result approved the resolution of the tender committee that the procedure was due to the Bank policy. Therefore, for us it meant a loss of time.

The agreement is signed between «Lvivavtodor» and Mikroelektronika, general contractor of the consortium, and starts the process of the e-ticket system implementation, which will be the sole ticket for Lviv that combines all types of public transport with an option to buy a certain usage time (day, week or month).

The next stage is the adjustment of all technical specifications that will last up to 3 months, afterwards, starts the development of the equipment and its further supply to the buses”, noted Andriy Bilyy, deputy director of housing department.

After the signing of the Contract Agreement is coming the stage of practical realization of the project that consists from the next phases:

According to preliminary schedule from the moment of the signing of the Agreement until commission — 74 weeks. 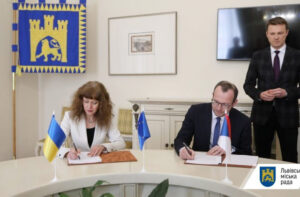 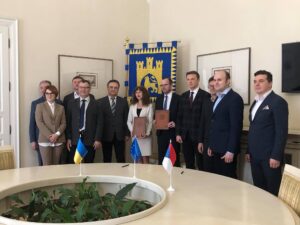